Steve is a native Oregonian, born in Grants Pass in 1953. He was, however, raised in Northern Nevada, living in Sparks, between the Sierra Nevada Mountains to the West, and the desert to the East. From his youth there was a fascination and love of nature, instilled in no small part by parents and grand parents that also loved the outdoors. Every chance to get away from the city was taken, either to the mountains or desert, exploring new streams to fish, mountain lakes to camp by, desert lakes to swim, and old ghost towns in the middle of nowhere to investigate.

Once graduated from high school he returned to Oregon and the town of his birth to attend Rogue Community College for an associate course in automotive technology, after which he spent 17 years in the auto repair industry. Even during that time he was outside at every opportunity, hiking, fishing, riding dirt bikes, dune buggies and 3 wheelers. All were excuses to be in nature, playing in the dirt, away from asphalt and concrete.

Somewhere in that time came a friendship with his future wife, and they started a small farm raising chickens, rabbits, goats and sheep. Learning to care for the land and the creatures on it seemed like a natural extension of his lifelong appreciation of the natural world.

A renewed interest in photography that he had as a boy. Back the he had an old Brownie box camera, only now it was a fancy SLR film camera. Now he could capture the beauty he saw in nature in color on print and slides, not just in his own memory, thus a passion was reborn.

Years later, after job changes and a bigger farm, sadly the marriage ended. In the meantime through searching for someone local who also raised Angora goats, he met Stanley Petrowski, who with his wife, had a ranch nearby and they became fast friends with common interests.

Endangered Species Act listed Coho salmon returned in the stream that crossed Stan’s ranch. They hadn’t been there in 60 years. A major restoration project ensued. It soon became evident that a tremendous amount of habitat restoration needed to be done in the region as a result early resource extraction activities post WWII. Clear Cut logging, free range cattle ranching and infrastructure development were taking a heavy toll on the natural world.  The experience on Stan’s ranch inspired us to form a non-profit organization to facilitate restoration projects and engage the communities of the South Umpqua basin in this work. The South Umpqua Rural Community Partnership was born. As a founding member Steve became the organizations Treasurer.

Steve’s interest in nature, landscape and wildlife photography grew, leading him to many National Parks and weeks long stays in and around those wild places. Seeing the comparatively pristine condition of those places made the reality of the state of his own backyard even more stark. 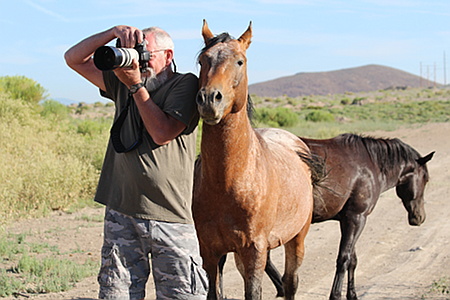 On one particular trip to Yellowstone National Park, he was looking over maps of the surrounding area and noticed a place in Montana called the Pryor Mountain Wild Horse Range. Well, that definitely needed exploring.  He wrapped up quickly, leaving his camp set up in Yellowstone. A day trip was made. It took three hours along a grueling 4WD trail to reach the horses’ 8,500 ft altitude Summer range. One glimpse of the experience and he was hooked. The ruggedness of that place and the beauty of the wild horses was now in his blood.

Many trips and thousands of photos later, the desire for wild horses everywhere to be protected has not waned, as he is convinced they have earned a place on the landscape as much as any native creature.

This desire is a natural outgrowth of the wish to see much needed restoration of habitat right in our own watersheds to protect flora and fauna.